~ A review by Andy Clemence

I faced a bit of a dilemma when I went to the Director's Guild in Hollywood last weekend to see an early screening of the new Les Misérables film. I didn't want to like it or dislike it just because it was Les Mis. I, along with millions of others, had seen the original stage musical on Broadway and loved it. The full-length international cast recording had not come out yet, so there was quite a bit of music I hadn't heard just from listening to the Original London Cast album. It was a fantastic experience. But as time progressed, my enthusiasm receded and my recollection became that I loved the first 40 minutes until the rest of the show then slid into an endless downward spiral of myopic ballads. So going into the film at the DGA, I didn't want to bring along any preconceived notions about it. I knew who the main cast was, and knew some of them could sing. I had also read about the experimental live mic technique they used so the actors could actually sing the performances real-time during the filming as opposed to synching the film's soundtrack in post-production. 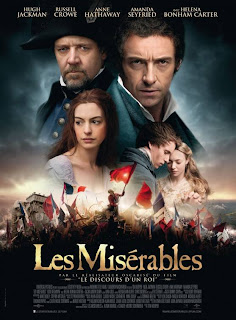 I took my excellent seat in the twelfth row center and settled in as the curtain opened and the film began. First impression: okay, the music has been beautifully recorded in all it's full power and majesty. So far, so good. As the chorus of men began singing “Look Down,” it became clear that the live mic technique was going to work. Then Jean Valjean and Javert started singing and it did actually take a second to get used to the fact that the characters are singing in a very, very live and exquisitely realistic setting – a vast shipyard in the pouring rain. But thankfully only a second, because it is a through-sung musical after all and we'd be in for a lot of difficult listening otherwise. But the sound was excellent and the live singing worked beautifully.
It also became painfully obvious right away who could sing and who couldn't. I'm a fan of both Hugh Jackman and Russell Crowe and think both are very strong actors. I knew Jackman has had a long and very successful musical theater career behind him and so would probably be able to handle the role of Valjean. Crowe however, I wasn't so sure about musically. As far as his intensity as an actor, he was completely riveting as Javert. But it's obvious immediately in the shipyard scene that he's going to have trouble singing this role. I actually felt a little bad for him. But be that as it may.
Despite my fear that I would succumb to the flawless history of Les Mis, the film is stunning. There are some minor flaws in a few places due to camera positioning, etc. But I was happy to see that for the most part, director Tom Hooper let the actors sing their main big pieces straight through with as little camera cuts as possible. He also kept the camera very tight on their faces when they reached their life-changing crisis moments, especially Valjean and Fantine.
Now, let me say, that if Hugh Jackman doesn't win an Academy Award, then no one should. His performance of “Valjean's Soliloquy (What Have I Done?)” is absolutely devastating. It's one of the most compellingly realized pieces of acting I've seen in years – and he was frickin' singing it live at the same time! I honestly don't think I can overstate this. This man is at the end of his rope and it makes you wonder about the source of life Hugh Jackman is tapping into. The depths of this actor's soul are stripped naked here. It is a raw and unrelenting display of a tortured creature. And although Valjean moves into a successful life as Mayor, Jackman never let's go of the shame and fear that continues to haunt him right up until his deathbed. I've seen all the contenders for this year's Best Actor and was very impressed by all of them. But seriously, there is no contest.
The other performance that just left me struggling to breath, is Anne Hathaway's Fantine. There have been many, many amazing renditions of “I Dreamed A Dream” over the years, making it an almost impossible act to improve upon. But I have never, never felt Fantine's agony like I did here. This is no performer pouring her heart out to give us a show-stopping musical number. This is a desperately ruined young woman allowing us access to what are possibly the final moments of her life. Again, Hooper stays extremely tight on Hathaway's face and if I recall, is done in one complete take. And as she continues to descend into the worst of all human conditions, her humiliation is unbearable. And like Jackman, Hathaway's soul is absolutely shattered here, splayed naked for the world to see. Credit has to go also to very subtle changes in her attire; cruel and demeaning things that others have plastered onto her body without her even knowing they're there. These touches of ridicule remind us that she is almost no longer a woman, but merely a painted object that can barely stand.
One more mention. I've seen Eddie Redmayne now in a couple things. I thought he was great in My Week With Marilyn (although it was a bit hard to get past the Bobby Kennedy resemblance). When I first saw him on the screen here in Les Mis as the love-stricken revolutionary Marius, I thought, “Oh, him again.” I had no idea if he could sing and his first few lines made me wonder. But that doubt was quickly put to rest. His performance in this film is excellent. The role of Marius is written in a consistently high register, but Redmayne's singing voice is both lyrical and emotional.
So there's my take on the new Les Misérables film musical. Production design by Grant Armstrong, Gary Jopling, Hanna Moseley, and Su Whitaker is striking. The cinematography by Danny Cohen is gorgeous. And the exquisite costuming by Paco Delgado just boggles the mind. I don't think the film itself is a Best Picture winner, but it's 100% faithful to the original Broadway show, seamlessly directed, and beautifully executed. Yes, there were some things that make it less than perfect, but a universal story backed up by a brilliant libretto and score and superb acting make it difficult to argue against.
I would also point out that this is a fully cinematic vision. It is a film in every sense of the word, and at no time did I have the impression that they were 'just filming the musical.' Considering that everything is sung, that's quite an epic achievement.
So happily, my dilemma was resolved. And I can safely say that all this praise is absolutely not just because it's Les Mis living up to it's reputation.

Posted by Andy Clemence at 4:04 PM No comments:

Gift of Life, that grips my soul
And threatens yet to take me whole
Before I lift my face to death
Let me have just one more breath.

One more breath to taste the dream
That floats before my eyes unseen.
One last breath to say goodbye
To she who was my reason why.

Let me breathe for just a time
Without the ache that is always mine.
Let me breathe a moment more
So that my broken heart might soar
And learn again before I’m through
The happy secret I once knew.

Give me this and I will leave
Without a word and never grieve.
Just a smile within my heart
For all I’ve had right from the start.
Gift of Life, don’t cry for me
I’ve been blessed just to be.
Loved enough for eternity.

I give my future to the past.
Gift of Life, you are gone at last.

Friday the 13th (October), 1307 – the day in history when King Phillip of France ordered and began the mass arrest and torture of The Knights Templar all across France (and eventually Europe). Thousands were captured and imprisoned this day, then systematically tortured by the Inquisition. Ironically, most went willingly, thinking they had done nothing wrong and that God would stand by them. Finally, those who managed to survive the torture were burned alive as heretics. Thus ending once and for all the 200-year autonomy of the wealthiest, most powerful medieval Order of warrior-priests the world had ever known. The Knights Templar's influence is everywhere even now: they were responsible for the building of the great Cathedrals of Notre Dame, which were strategically laid out across Europe in the form of the constellation Virgo, the Virgin (don't believe that one? Check NASA satellite imagery); they created the first international banking system that is still in use to this day; the infamous 'skull and crossbones' adopted by pirates was originally the battle flag of the Templar Navy. Though a Christian Order, answerable to no one but the Pope at Rome himself, their original founders included French noblemen of Jewish ancestry and during the course of their phenomenal rise to power, they secretly welcomed all beliefs, and harbored strong alliances with Saracens and Jews alike in the Holy Land. They practiced many unusual secret rituals, many of which are still used today by the various branches of Freemasonry, including an ancient Egyptian 'living resurrection' ceremony. Two years after the Templars' spectacular fall from grace, their last Grand Master, Jacques de Molay, after suffering endless forms of unimaginable torture at the hands of the Holy Roman Papal Inquisition, was taken to a small island in the center of Paris and with his best friend and confidant, was slowly and literally roasted alive over a spit while entire public masses gathered to watch his long, agonizing death.
Thus, to this day, Friday the 13th is still considered a day of 'bad luck.'

The New Knighthood: A History of the Order of the Temple
by Malcolm Barber. The definitive history of the Templars from the foremost Templar historian.
Posted by Andy Clemence at 4:21 AM No comments:

The man gazed curiously at the boy; he was so small, so frightened; cut, bruised, covered in dirt.
“You have a lot of courage, you know...” said the man.
The boy's downcast eyes filled with tears.
“No, I don't.” he said quietly. “I thought I could be brave. But I'm not. I thought I could do this, but I'm scared to death.”
The man gently placed a finger under the boy's chin, lifted his face, and saw the shame in the boy's eyes.
“Courage,” the man smiled, “has nothing to do with being brave. It's about being scared to death... and doing it anyway.”
~ Andy Clemence
Posted by Andy Clemence at 5:14 PM No comments: